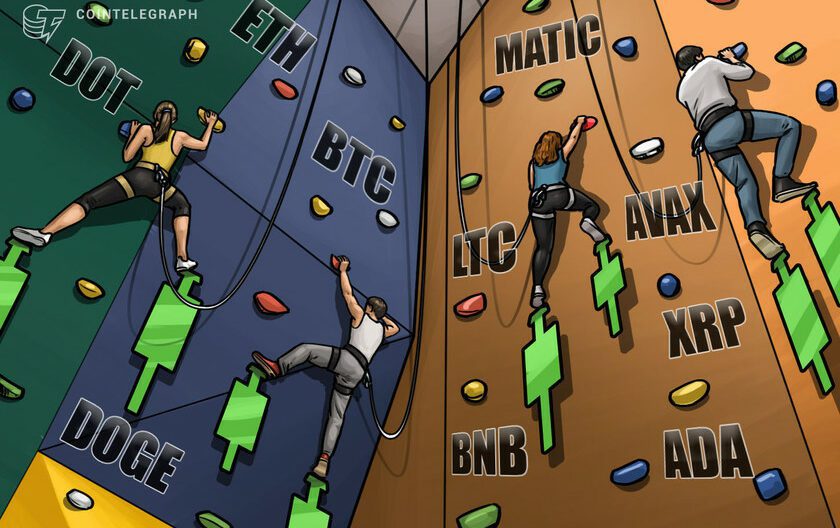 Positive U.S. economic data initially propped up crypto and stock markets, but it appears that bulls lack the might to keep the rally rolling.

The United States producer price index (PPI) fell 0.5% for the month, which was much more than the 0.1% decline estimated by economists surveyed by Dow Jones. The largest monthly decline since April 2020 was also aided by a sharp drop in energy prices.

Another report showed that the retail sales data dropped 1.1% in December, a tad bit more than the anticipated 1% decrease.

Although both data points show inflation is cooling off, the U.S. stock markets failed to hold on to their initial gains. Similarly, several cryptocurrencies sold off from their intraday highs, indicating that traders may have booked profits ahead of the Federal Reserve’s meeting on Feb. 1.

The strong crypto recovery in the past few days has seen traders return to the fore. Bitcoin’s (BTC) trading volume soared 114% over seven days. Strong volume accompanied by a sharp rise in prices usually indicates aggressive buying by the bulls. This increases the likelihood that Bitcoin’s November low at $15,476 may not be breached.

How far could Bitcoin and altcoins correct and what are the important support levels to keep an eye on? Let’s study the charts of the top-10 cryptocurrencies to find out.

Bitcoin rose above the overhead resistance of $21,480 on Jan. 17 and Jan. 18 but the bulls could not sustain the higher levels as seen from the long wick on the candlesticks. This shows that the bears are protecting the level. 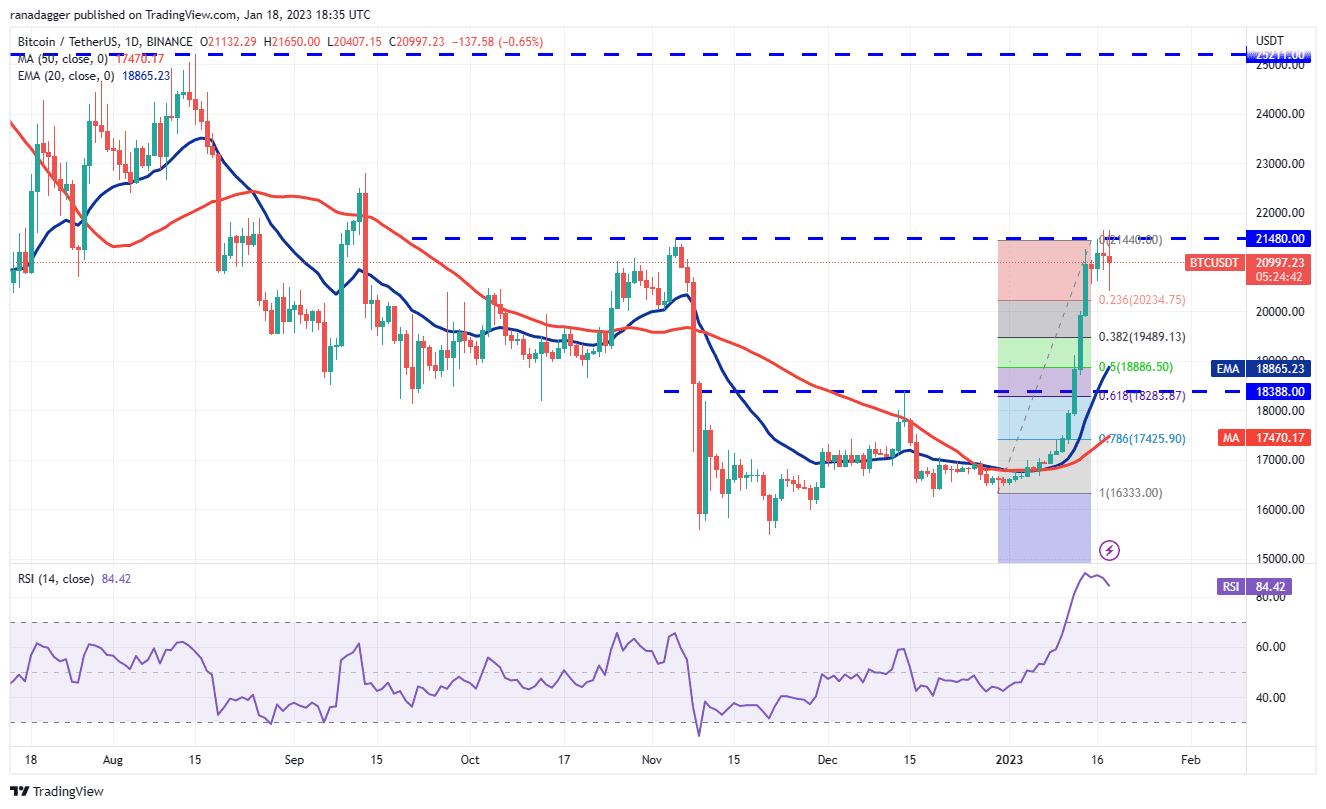 The failure to sustain above the overhead resistance may attract profit-booking by short-term traders. That could start a short-term correction in the BTC/USDT pair. The first strong support is the 38.2% Fibonacci retracement level of $19,489.

If the price springs back from this level, it will suggest that shallow dips are attracting buyers. The bulls will then again attempt to thrust the price above $21,480. If they succeed, the pair could start the next leg of the up-move to $25,000.

This bullish view could be invalidated if the price continues lower and breaks below the 20-day exponential moving average ($18,865).

The $1,600 level in Ether (ETH) has proven to be a formidable resistance for the bulls. Although buyers managed to break above this resistance, they could not achieve a close above it. 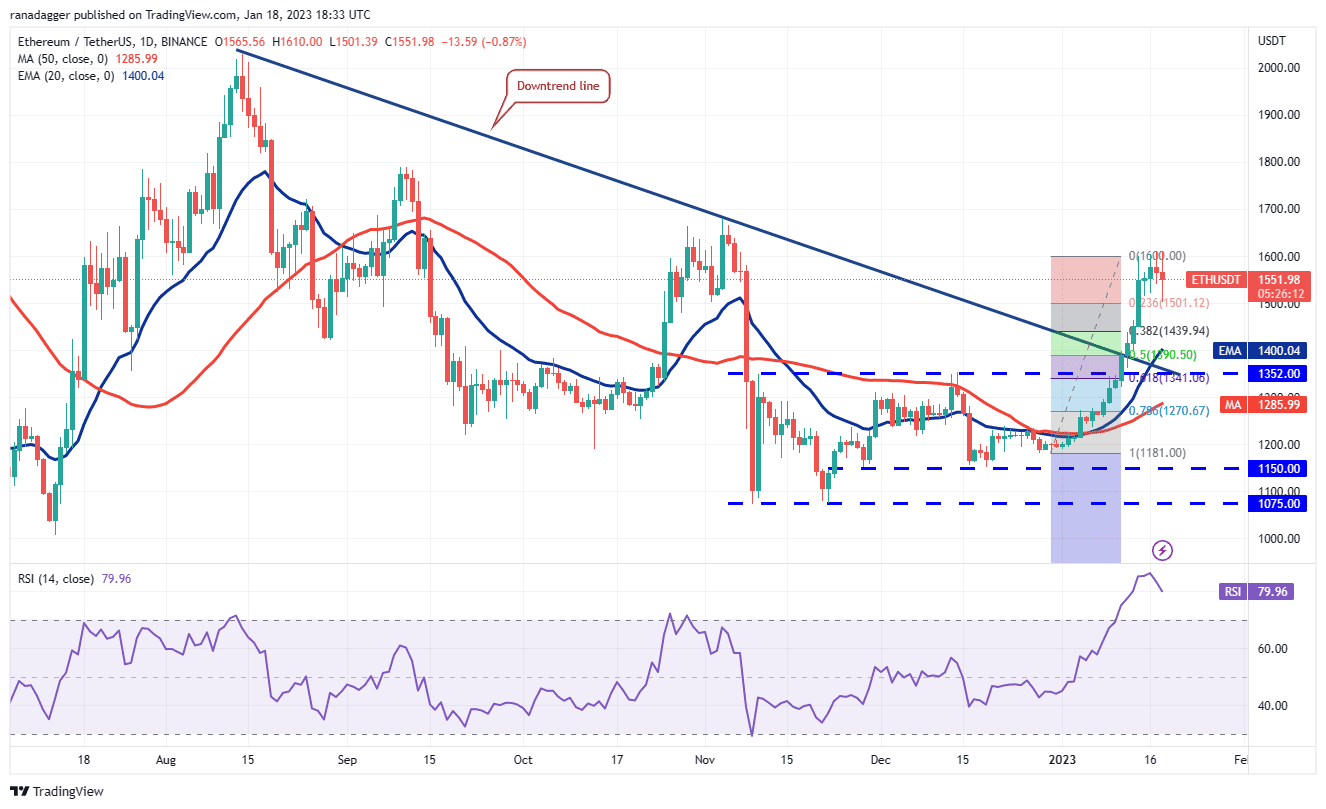 This zone could entice buyers who may have missed the bus previously. That could result in a retest of the $1,600 resistance. If this level is scaled on a closing basis, the pair could soar to $1,800 and then make a dash to $2,000.

If bears want to invalidate this positive view, they will have to pull the price back below the 20-day EMA.

BNB (BNB) retreated from the overhead resistance of $318 on Jan. 14 and reached the 20-day EMA ($280) on Jan. 18. Buyers bought this dip with vigor as seen from the long tail on the day’s candlestick. 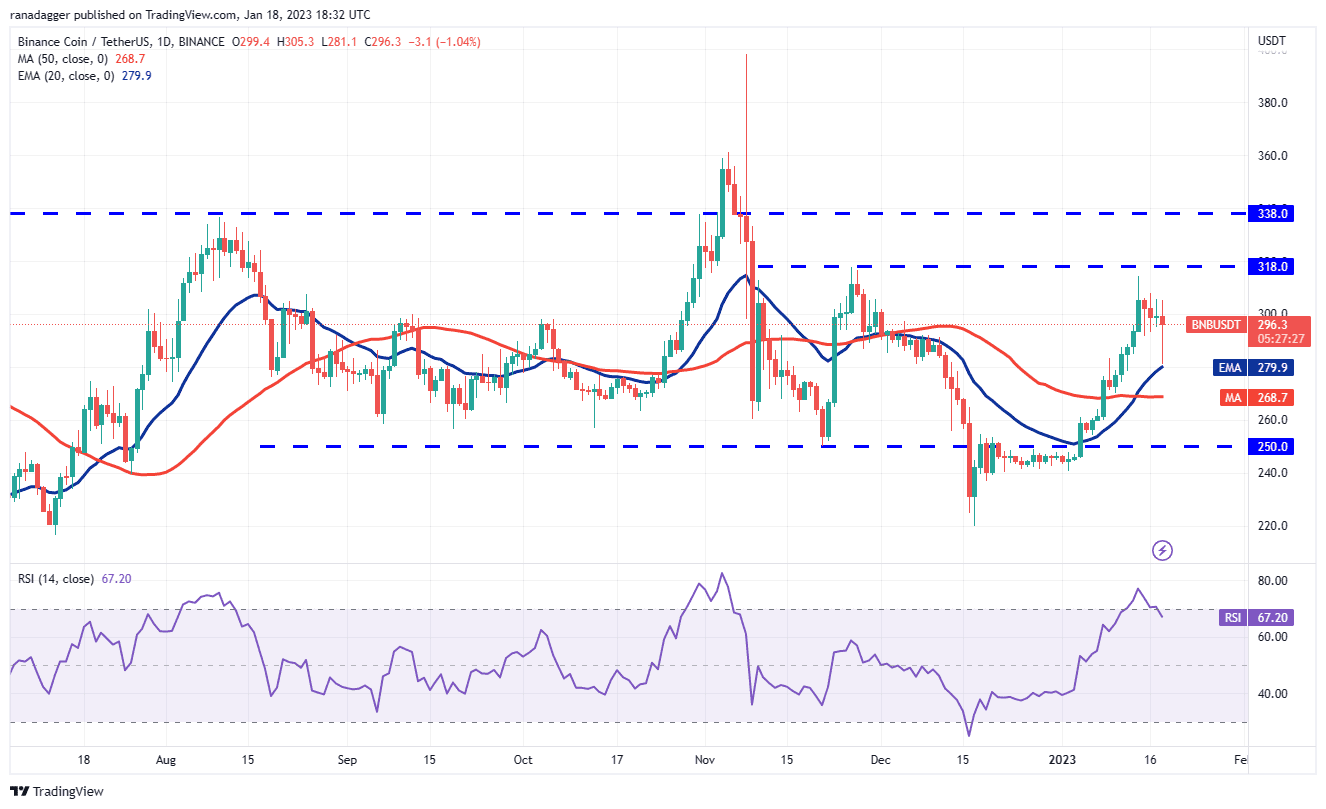 Buyers will try to build upon this momentum and catapult the price above the overhead resistance at $318. If they manage to do that, the BNB/USDT pair could march toward $338. The bears may mount a strong defense at this level but if bulls clear this hurdle, the pair could skyrocket to $400.

Contrary to this assumption, if the price breaks below the 20-day EMA, it will suggest that the pair may oscillate inside the large range between $250 and $338 for a while longer.

XRP (XRP) turned down and slipped to the moving averages on Jan. 18 but the long tail on the candlestick indicates aggressive buying at lower levels. 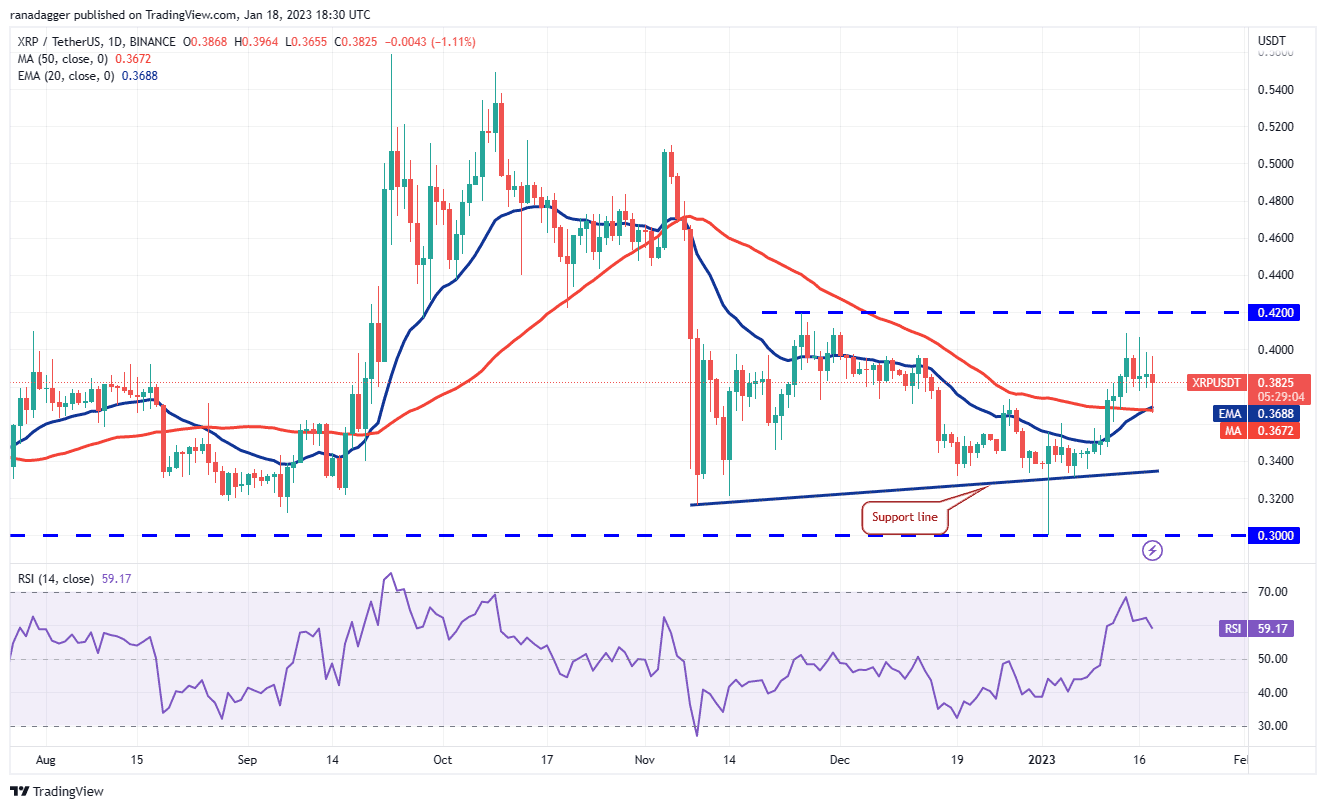 The moving averages have completed a bullish crossover and the RSI is in the positive zone, indicating that bulls could prevail. A break and close above $0.42 could start an up-move that may hit the overhead resistance at $0.51. This level may again attract selling but if bulls pierce this resistance, the rally could stretch to $0.56.

If bears want to prevent the bulls from launching the price higher, they will have to pull and sustain the XRP/USDT pair back below the moving averages.

Cardano (ADA) has formed a bullish flag trading pattern in the past few days. If buyers propel the price above the flag, it will point to a possible resumption of the up-move. 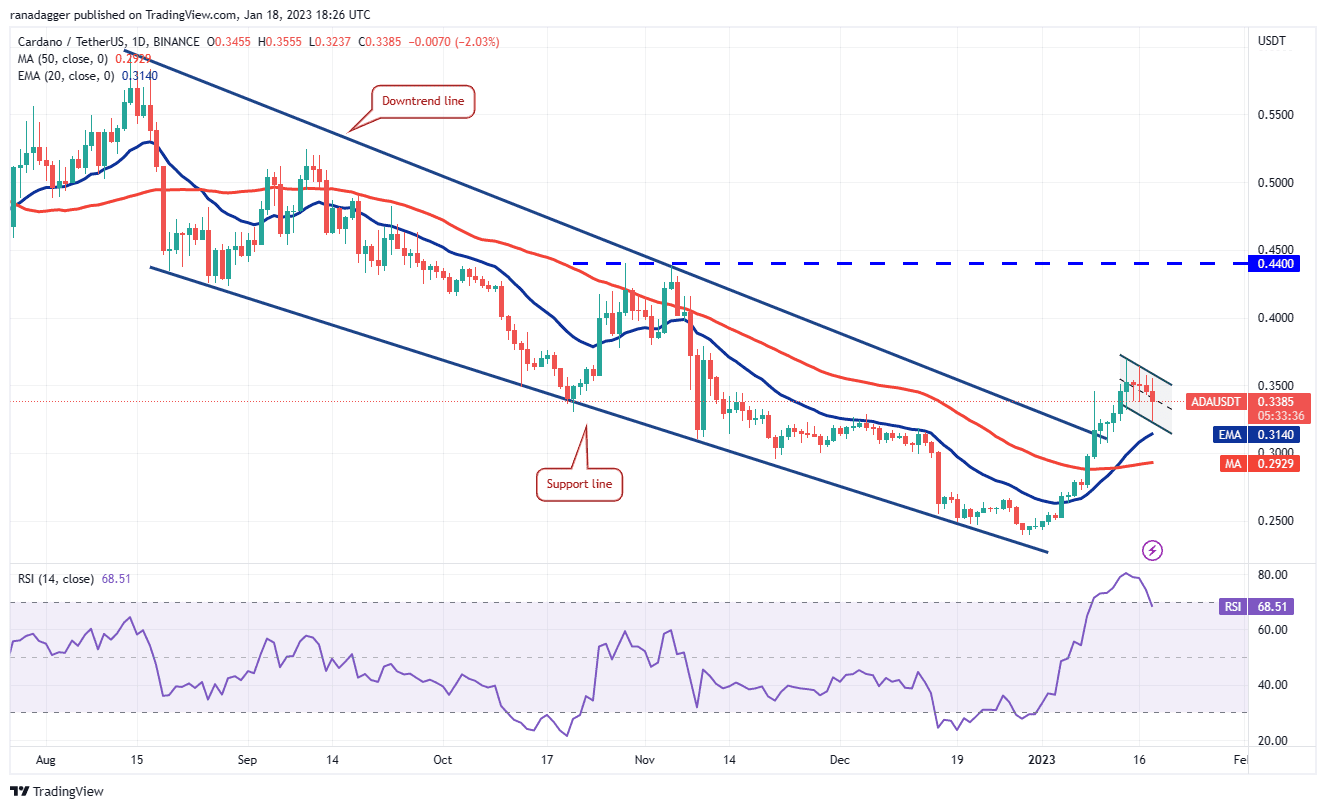 The ADA/USDT pair could first surge to $0.44 and thereafter to the psychologically crucial level of $0.50. Such a move will suggest that the downtrend may have ended.

The bears may not want that to happen. They will try to pull the price below the flag. If they manage to do that, the pair could slump to the 20-day EMA ($0.31). If the price rebounds off this level with strength, buyers will again try to overcome the obstacle at $0.37.

Conversely, a break below the moving averages could tilt the advantage back in favor of the bears.

Dogecoin’s (DOGE) recovery faced rejection near $0.09 on Jan. 14 and again on Jan. 18, which shows that the bears have not given up and are active at higher levels. 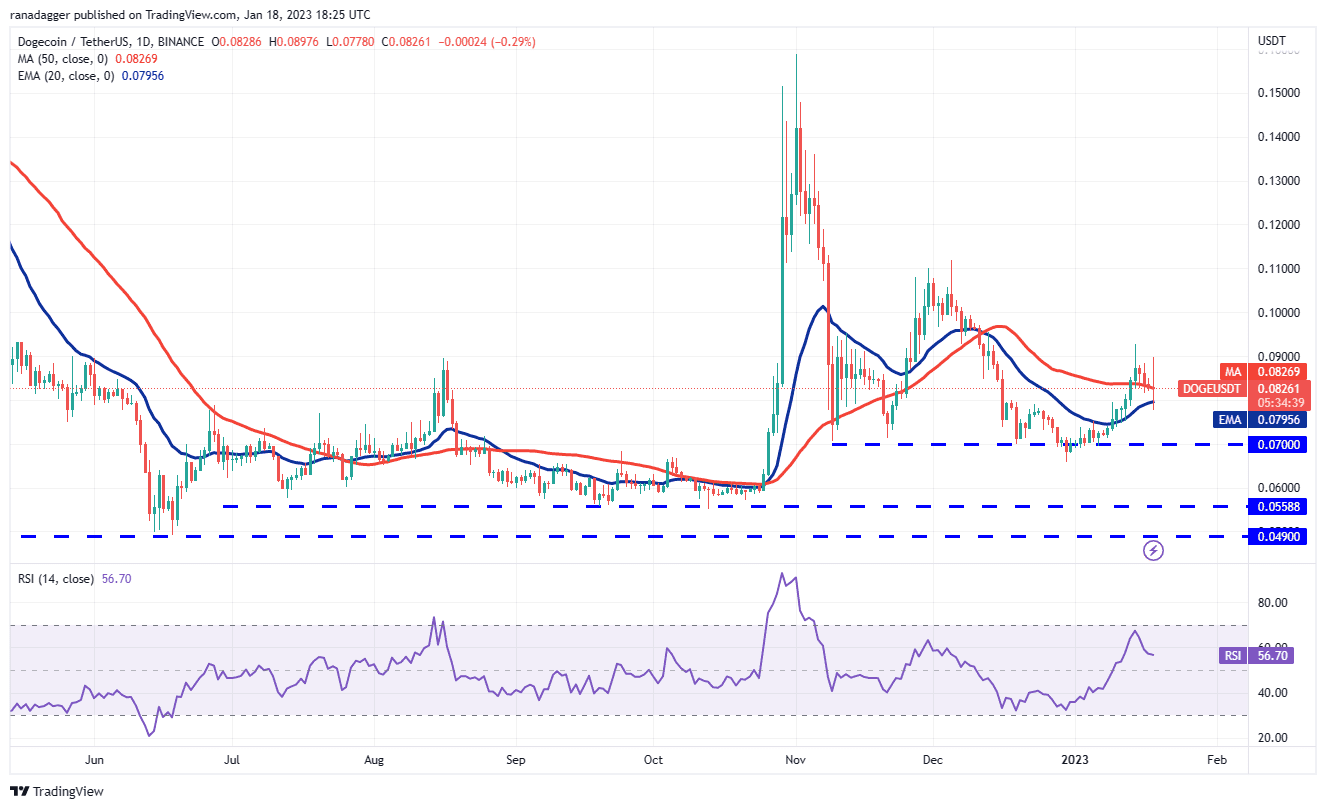 The bears pulled the price below the moving averages on Jan. 18 but have failed to sustain the lower levels. The gradually rising 20-day EMA ($0.08) and the RSI in the positive zone indicate that bulls have a slight edge. Buyers will try to kick the price above $0.09 and start the northward march toward $0.11.

On the contrary, if the price closes below the moving averages, the DOGE/USDT pair could tumble to the critical support at $0.07.

Buyers again tried to thrust Polygon (MATIC) above the overhead resistance of $1.05 on Jan. 16 but the bears held their ground. 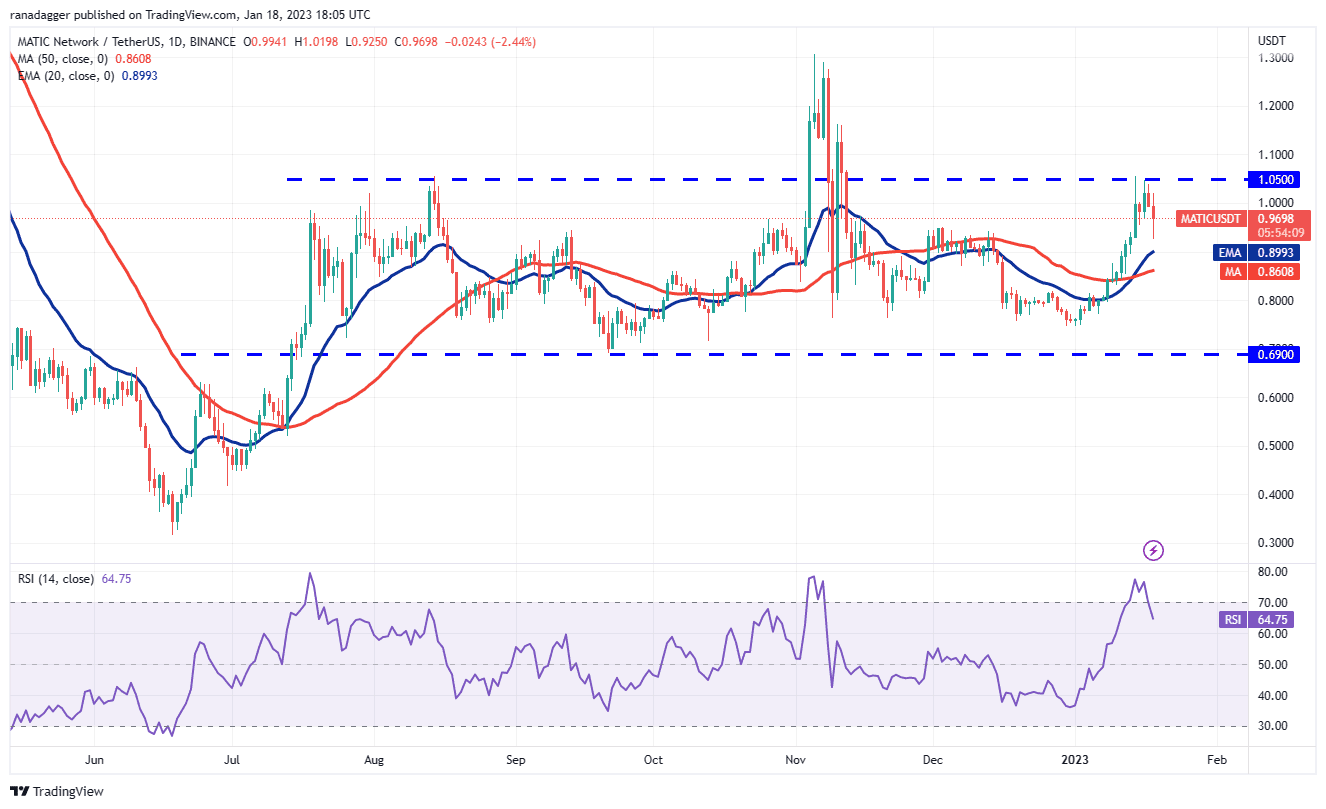 The repeated failure to clear the overhead hurdle may tempt the short-term traders to book profits. If that happens, the MATIC/USDT pair could slump to the 20-day EMA ($0.90). Such a move will suggest that the pair may extend its stay inside the large range between $0.69 and $1.05 for some more time.

Alternatively, if the price turns up and pops above $1.05, it will signal the start of a new up-move. The pair could then rally to $1.30.

Related: Ethereum price technicals hint at 35% gains versus Bitcoin in 2023

Litecoin’s (LTC) up-move faltered near $91 on Jan. 14 and the bears pulled the price back to the 20-day EMA ($80) on Jan. 18. Buyers are trying to protect the level as seen from the long tail on the day’s candlestick. 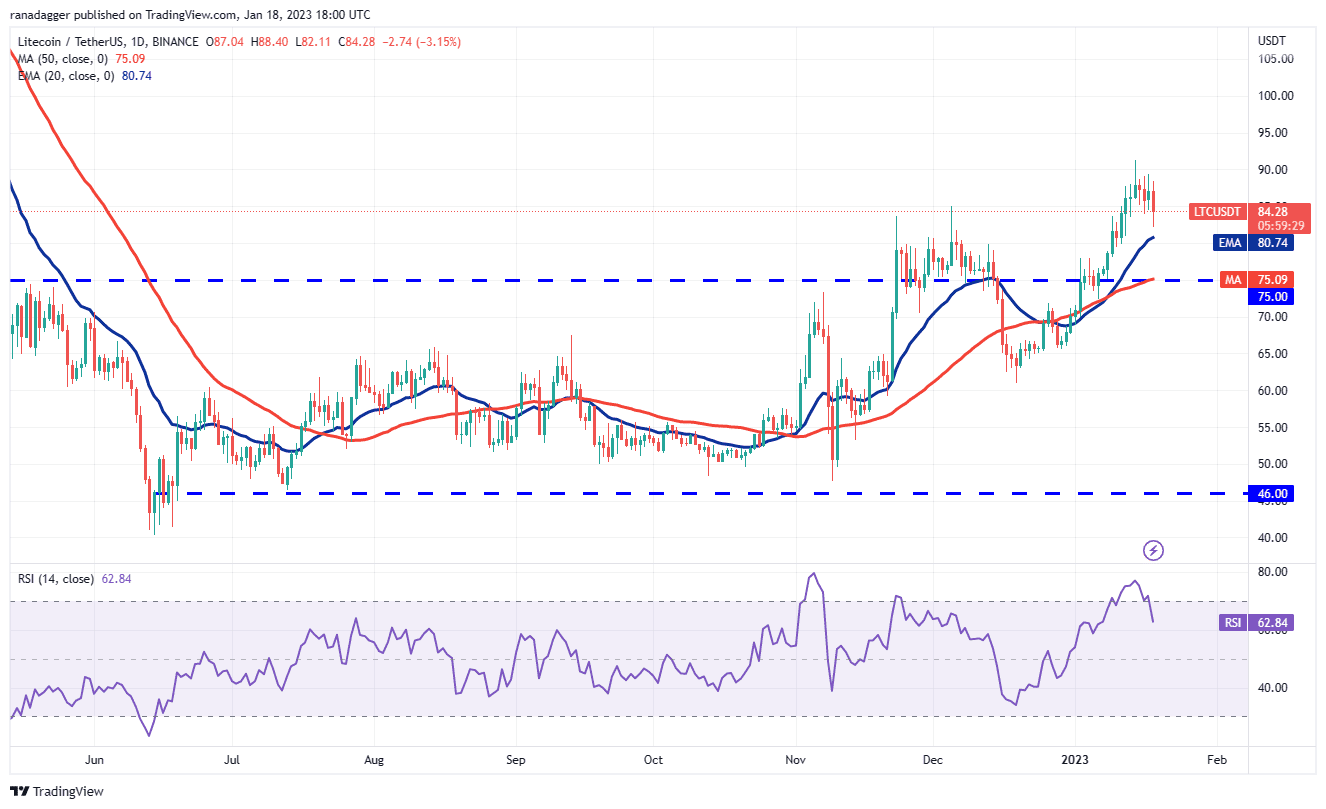 The upsloping 20-day EMA and the RSI in the positive zone indicate a mild advantage to buyers. If the price turns up and climbs above $91, the LTC/USDT pair could soar to $100 and then to $107.

On the other hand, if the price slides below the 20-day EMA, the pair could reach the breakout level of $75. This is an important level for the bulls to defend because if this support cracks, the pair could plunge to $65.

Polkadot (DOT) has been trading near the downtrend line for the past few days, indicating a tussle between the bulls and the bears for supremacy. 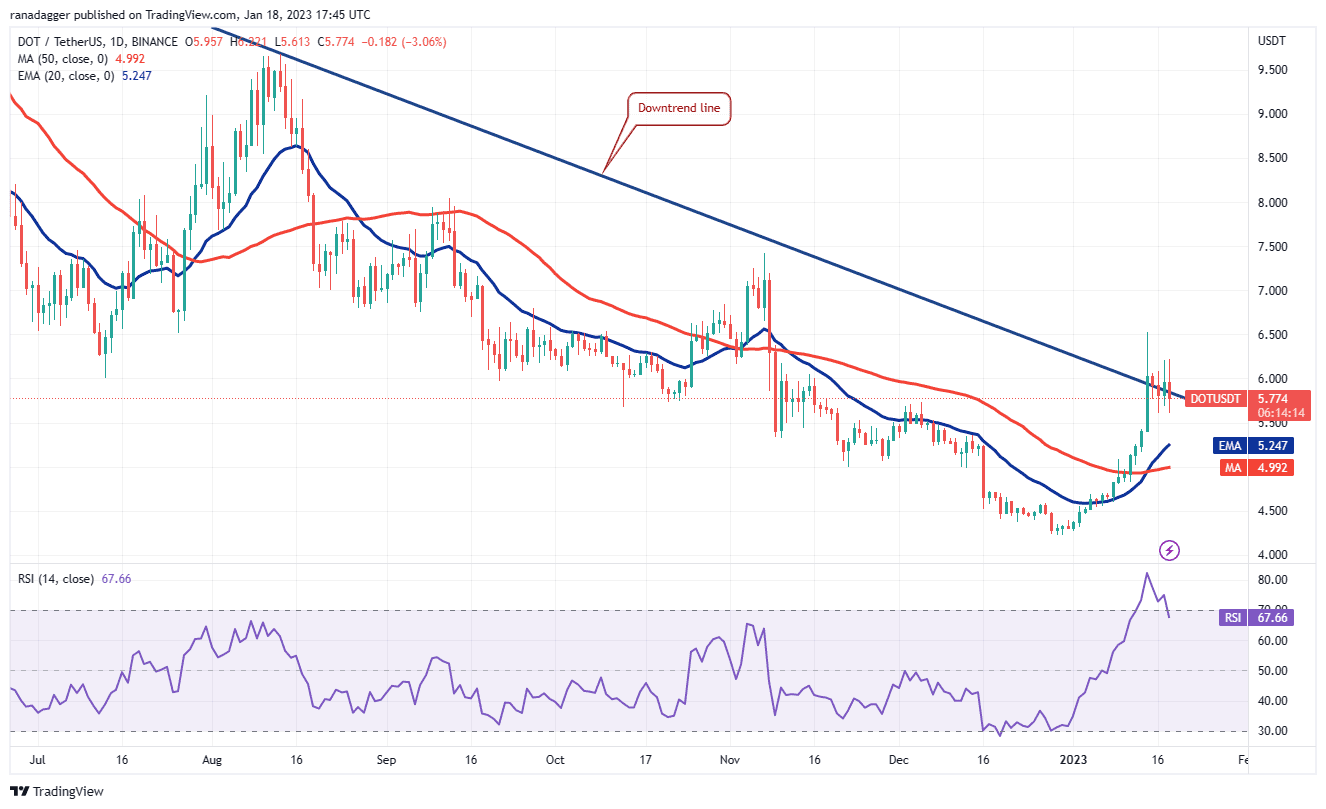 The 20-day EMA ($5.24) has started to turn up and the RSI is near the overbought territory indicating the path of least resistance is to the upside. If buyers drive the price above $6.53, the DOT/USDT pair could pick up momentum and travel to $7.42 and thereafter to $8.05.

Contrarily, if the price turns down and slips below $5.60, it will signal that bears are trying to make a comeback. The sellers will come out on top if they manage to sink the pair below the moving averages.

Avalanche (AVAX) skyrocketed above the downtrend line on Jan. 11, indicating a potential trend change. The bears have not yet given up as they are trying to stall the up-move at $18.54. 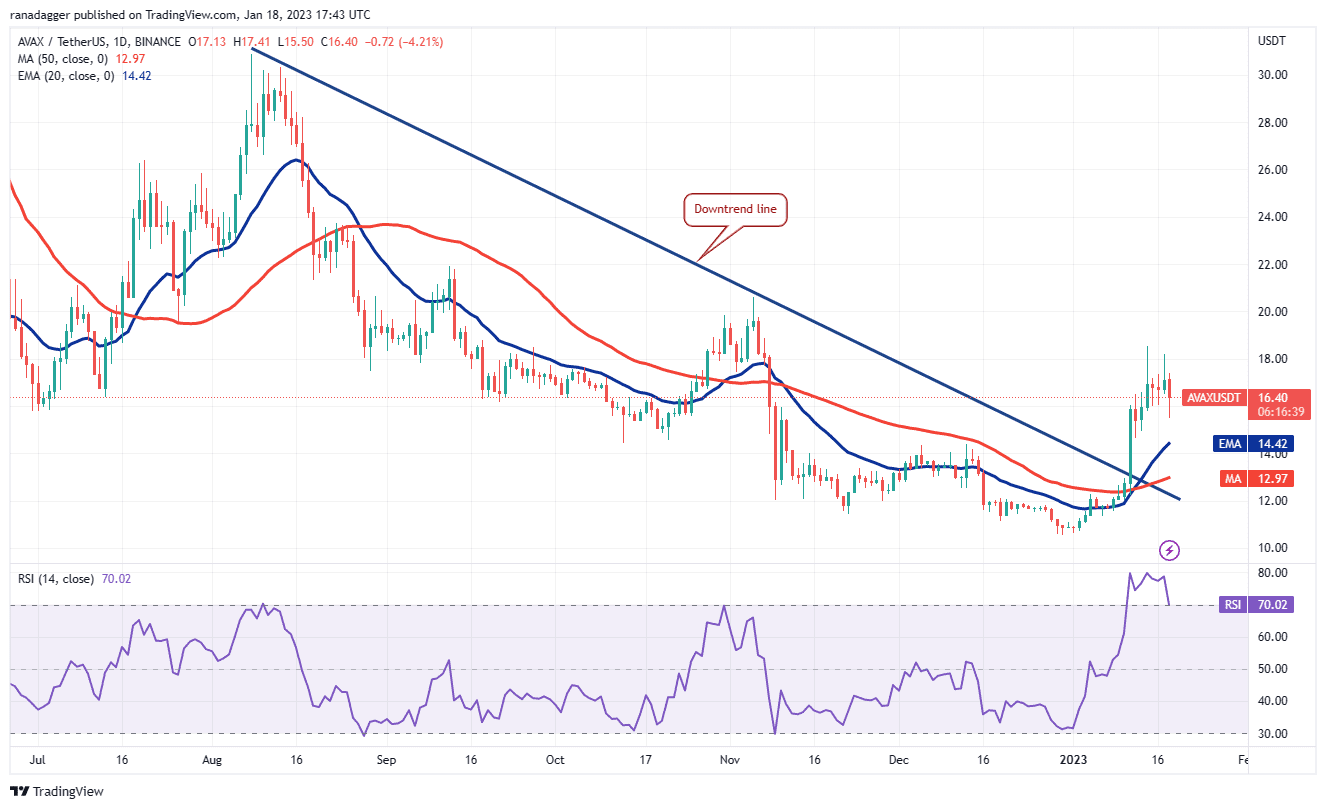 The upsloping 20-day EMA ($14.42) indicates advantage to buyers but the RSI in the overbought zone suggests a few days of consolidation or a minor correction in the short term.

If the price turns down and breaks below $15.50, the AVAX/USDT pair could drop to the 20-day EMA. This is an important level to keep an eye on because a bounce off it could increase the likelihood of a rally to $20.63. The bears will gain the upper hand if the pair plummets below the 20-day EMA.

The views, thoughts and opinions expressed here are the authors’ alone and do not necessarily reflect or represent the views and opinions of Cointelegraph.

This article does not contain investment advice or recommendations. Every investment and trading move involves risk, and readers should conduct their own research when making a decision.